Any future pictures will most definitely bring up questions. And in order to keep it real around here I might as well spill it. The good, the bad, and the ugly.

Backing up a little...

Last weekend was a weekend full of cleaning out, rearranging, preparing for baby, organizing, etc. You name it, we did it. It felt great. I love weekends like that. Saturday was an extremely productive day. I also realized why pregnant women should do the baby stuff much earlier in their pregnancy than I chose to. Because lifting boxes and sorting through stuff is exhausting at 37 weeks.

So needless to say, I was looking forward to a nice, relaxing Sunday. Going to church, lunch with the family, nap and family game night. Our usually Sunday.

We were almost ready for church and I was starting to blow dry Olivia's hair. She flipped her hair over and it looked like dandruff. But no. Worse. You guessed it. LICE.

The thing is, Olivia has been complaining about her head being itchy. So being normal, fairly concerned parent, I had my dad check it out and even had the PEDIATRICIAN look at her at the doctor last week!!!!!!!!! People...I asked the DOCTOR!!! So I don't know how this escaped our attention.

So, wanting to fix it NOW, I bolted out the door in 1.5 seconds. Bought $40 worth of lice kits and beelined it home. Robert and I spent the next 2.5 hours hand combing every single strand of hair on Olivia's head. Both of us!! It was tedious. But absolutely 100% necessary.

It didn't even cross our minds to check out Lillian and Landon because we were so consumed with getting Olivia better. I felt so bad for her! Lillian checked out okay but Landon, not so much. It was not NEARLY as bad as Olivia had it but he still needed to be treated. The most obvious and helpful solution was to shave his head. {heavy sobs}

I was racking my brain to figure out any other way around it. We were due for a haircut the next day (I ♥ his barber so much) to prepare for his first day of school. But that didn't seem right. So Robert brought out the clippers. I cried, oh I cried. I cried so hard the only thing I knew to do was call my momma! And I did. I think it was a culmination of how the whole morning unfolded, the ache for my kids having to go through this, and of course, the lovely raging pregnancy hormones.

Mom was so nice and told me that I'm not a bad mother because of this. And that we had it every year for 3 years during elementary school. Even our neighbor was telling us stories about having it. So we aren't alone in the "lice club". Still. I was a little embarrassed in the checkout line at Walmart. And I've bought things that should have embarrassed me much more before! :-)

Needless to say, after the humans were dealt with, we tackled the material things in the house. I've never actually had to strip every.single.bed. at the same time - I rotate sheet washing. But there's always a first time for everything.

The worst part is, you have this whole "bug idea" in your head. So you start to feel all creepy crawly. I'm scared to touch anything in the house without sterilizing it. I'm not sure if I need to wash sheets every day for a while or just keep spraying. I don't know what the protocol is. Do I call everyone she's been in contact with? It's not like she's shared a brush with anyone recently. I just don't know what to do from here.


But here's what my sweet little boy looks like now. {more tears} 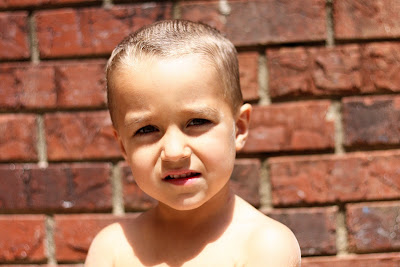 He was SO mad when he first saw it in the mirror. I mean, M-A-D. Sooo mad, it made Robert do this.

(picture removed at request of husband - it was his hair shaved as a mohawk) :-)

Then he finish it off. And Landon was happy. 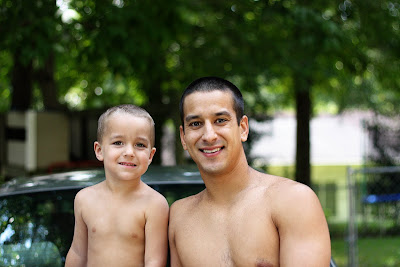 
And now, I officially have no one that will want to be in our vicinity this week.

I feel much better about this whole situation after talking with the doctor - who, by the way, said they are seeing this everywhere. They said the kids were fine 24 hours after being treated. We will still aggressively treat it just to be safe but I am confident with our efforts so far. Even though we weren't obligated to tell their school (and thank goodness they hadn't started yet!!!) we let them know anyways - in my heart, I felt it was the right thing to do.


It's also funny that everyone I tell has a "lice story". Kinda makes me feel better. Though OVERWHELM was the best word to describe how I felt the past few days. Because I assure you that this WAS NOT on my list to tackle before this baby comes. I think I even broke a record for number of loads of laundry done in one day.

Put it this way - I would rather us all have the THROW UP BUG than have lice!

But all is good now!!! :-) So no worries!
Published by Ole Miss Mom