Lil: The Smartest Poodle Ever :)

Well, I told you I'd tell y'all about Lil, so here it goes.

My first "daughter".  Who's been demoted 4 times and definitely knows it.

Anyway, I got a wild hair one day in college and decided to buy a dog.  A puppy really.  I knew I wanted a purebred toy poodle.  It's what I grew up with and loved.  I called around and found a breeder in Memphis.  I drove the hour up there to pick her out.  All by myself.  ($%*??? what was I thinking?)

Paid the $$ for her.  Money I shouldn't have been using to buy a dog.  I don't even think I can bring myself to tell you how much I paid for her.  YIKES!

Drove home with my new little un-named puppy.  To an 2nd floor apartment.  With room mates.  In a complex that didn't allow dogs.  Again, looking back, I was CRAZY!  I thought it was a great idea! (sarcasm)

It took a while to name her.  I think the name Lil evolved from calling her "Little Monster".  I don't even remember decided to just make it Lil.  It's just what she became.  (*My brother in law called her "Little" for the longest time.  He gets it right now!)

It only took about a week or two to realize I was in over my head.  So much, that I actually called the breeder and asked to return her.  Well, I didn't but was not the best pet owner.  She stayed in my room, and tore up the carpet at the door.  I was horrible at house breaking her.  I would take her out on the porch!!  ????

I think eventually my roomates were fed up and the complex caught on and said something to me.  So she stayed at Robert's place which was in the middle of nowhere.  Plus he had a lab that she hung out with.

She was the craziest little poodle.  She would run off ANYWHERE chasing birds.  In fact, in the middle of Robert's marriage proposal in the Grove, she ran off chasing a runner and he had to run and go get her.

She was SUPER smart.  As most poodles are.  She knew tons of tricks really soon.  I enjoyed teaching her those.  She would also fetch anywhere.  We would take her to the dog park and she would fetch better than the labs all the frat boys were trying to train.  She once tried to "fetch" the biggest tree limb in the pond.  It was 10x bigger than her but she grabbed it and dragged it as far as she could.

Eventually, she calmed down and we had 4 kids.  She's been great but she's approaching her 10th birthday and isn't showing much grace towards the kids anymore.  Well, Landon really.  They don't get a long really well.  But she's not aggressive or anything. 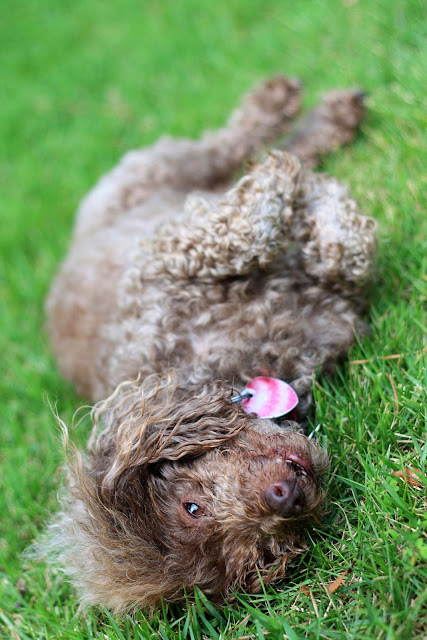 Oh, I almost forgot.  She got pregnant right before we moved to Birmingham.  And had her babies on Valentines Day!!  I delivered them too!


Olivia would play with them.  They were pretty cute, but we gave them all away. 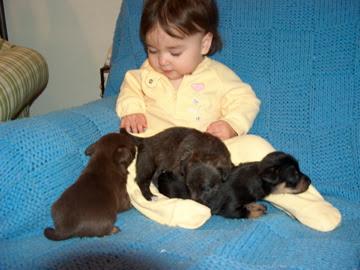 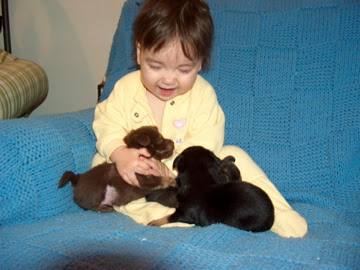 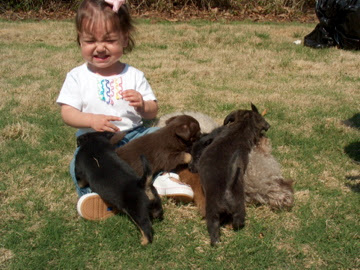 We tried once more to breed her with another toy poodle but were unsuccessful.  :(


She really is the smartest dog though.  Here is Robert doing a trick with her a couple of years ago.  Watching this I realize she's put on a couple pounds.  We used to think it was her hair but when we cut her, WOW.  Notsomuch.

Lil has been a great dog.  She now keeps to herself most of the time.  She doesn't run away or act out anymore.  She still knows most of her tricks too.  I know we will miss her when she's gone.

Oh, one more thing.  I know we have lots of "L" names in our family.  Especially when it comes to Lil and Lillian.  But the one thing I kept saying was, "I'm not going to not name my child Lillian just because I have a dog named Lil.  Lillian will be around a lot longer than Lil!"  Sorry Lil! :-)  But we love ya!
Published by Ole Miss Mom

Email ThisBlogThis!Share to TwitterShare to FacebookShare to Pinterest
Labels: animals