WOW. This may be the longest I've ignored my blog. At least since I had my mini meltdown in Feb/March. But I have a Doctor's Excuse! ;-)

Remember how I was saying how "unbelievably tired" I was in my last post? Well, it was SO much more than the regular "7 months pregnant + taking care of 3 little ones + 100°heat" tired. That's pretty tired.

When they ran the numbers for my glucose test ( I PASSED!!!! ), they also ran numbers for my iron! And it's LOW! The #1 symptom of low iron is FATIGUE! It's funny how it's all coming together. Because I had mentioned to several people just how TIRED (more than normal) I was feeling - which I put off to the baby having a growth spurt. Plus the ICE CHOMPING (which gives Robert a slight head tick when I do it) is a sign of low iron. I don't EVER chew ice. But have this unstoppable craving to eat it everyday. Weird, huh.

Plus, we were out of town at the lake last weekend and I had a little break from my precious MAC. So no blogging or photo fun!

But here's a little recap in pictures!

Tried to do a lot of this. Getting UP from a low hammock is no easy task for a pregnant woman! 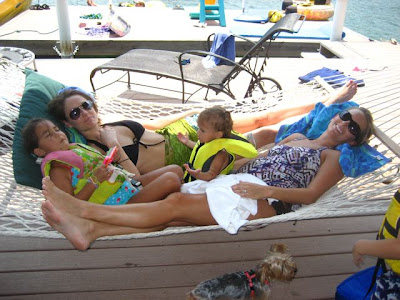 We did a little sliding. (Into the lake as well!) 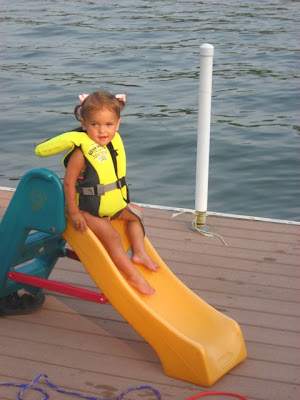 We put the crazy 2 year old on a tube behind the boat. And (surprise) it was HER idea! And she LOVED it! (Notice anything illegal in this pic?) ⬇ 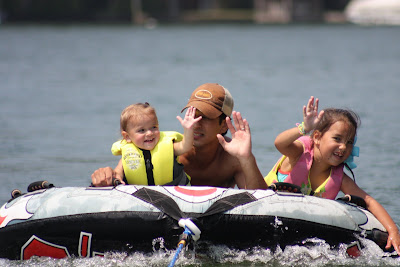 We "forced" Landon on the tube and (shocker) he LOVED it! We had a nice little trust/training/parenting moment with that one. 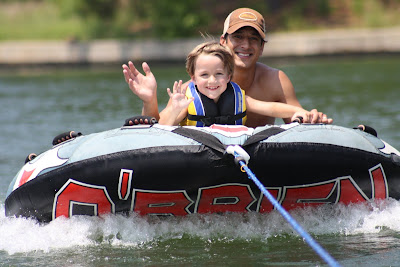 We did NOT force Landon into the lake. Just didn't want to pick that fight this weekend. But he had his fishing pole (regular size) and spent the days casting off the doc. Knowing that there has only been ONE fish to ever be caught off the dock, I just thought he'd get some good casting practice! Then we noticed he got his line stuck on something. He was yelling for help and we kept telling him he was doing a great job. Then all the sudden, he pulls up a BASS!!! His patience (and refusal to go in the water) paid off! He caught his very first fish and pulled it in all by himself!! 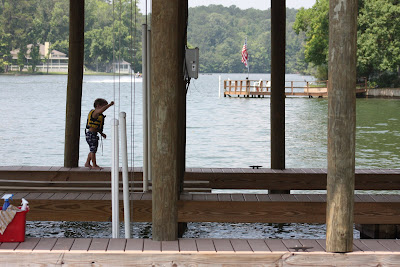 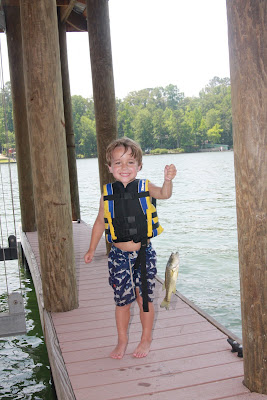 This summer is just FLYING by! And we're having a TON of fun! Hope yours is AWESOME too!!
Published by Ole Miss Mom

Email ThisBlogThis!Share to TwitterShare to FacebookShare to Pinterest
Labels: lake