Do you ever go visit the mall Santa? Well, we've been visiting this particular Santa since Olivia was almost 2. He actually remembers the older cousins....Abbey's been going since she was born - and she'll be 11 next year!!!! So needless to say, we had to go and visit him again. And we had all 7 grand kids this time - there's a first time for everything!

BUT, when you take 7 kids, wait in line for an hour, and then try to stick all 7 of them on Santa's lap, you're almost guaranteed a hilarious picture. I was lucky enough to snap off a few photographs while the santa photographer tried to get a photograph. 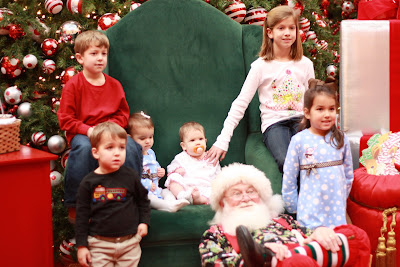 Santa was kinda overwhelmed when we all walked up. He had his own idea of letting them all sit in the chair and him lay on the ground. And he did NOT want the kids holding any of the babies. Who knows.... 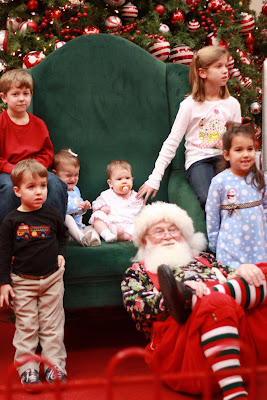 So we took a few like that....then the crying began. Lillian was fine until the other cousin her age started crying. It was a chain reaction after that. And we could not get ALL the kids to look at the same time. 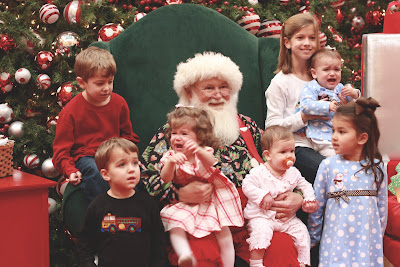 Then we regrouped on Santa's lap...set Kenzie on (the one crying on his lap) and tried to snap off a decent pic. 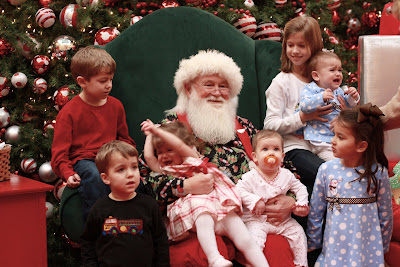 That dumbfounded look Landon is giving is the same in the photograph we bought. The only 2 kids actually looking at the camera were Abbey and Brandon. 2 out of 7 ain't bad. :-) 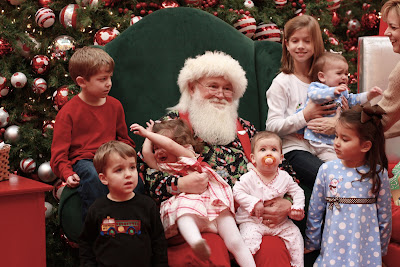 Well, we tried. And that's what counts right?? :-) I wish I could scan in the actual picture that the they took. It may actually be worth the time we stood in line. Because it...is...hysterical!!

Do you have any funny Santa pictures?
Published by Ole Miss Mom