...with a really long post with lots of pictures.

Well, I'm glad to hear you people like reading my blog! I've had numerous comments/emails on my lack of frequent blogging. So we'll get a little listy and catch up over the past few weeks.

#1 I did have some personal things happen on over the past few weeks that kept me from blogging. I do not plan on blogging about it since I'm pretty sure I don't personally know all my blogging readers. I am coming around to being open to talking about it, BUT would rather talk about it to a pretty face! :-)

#2 Olivia has her first loose tooth!! It freaked her out when she first realized it. We were eating Chick-fil-a and she wouldn't eat another bite because she was so worried about "hurting it". The only thing is, the new tooth is already starting to grow in!!! Thank goodness we have a dentist appointment next week and I can ask him about it.

#3 We did some serious garage saling 2 Saturdays ago and came home with some sweet bargains. My Apple keyboard recently had coffee poured down in it (achhem...Lillian) and broke. Robert swore he wouldn't buy me another one!!! (They're like $50+!!) Well, I happened to find a wireless one for $5. Score! Robert also got a brand new $170 weedeater for $20. Score again! The kids also got some little happys with their dollar! We'll have to do it again soon!

#4 Lillian is getting so fun!!! She's all about running around in her panties and giving kisses. HA! That was funny to type. At least for now that's acceptable!! She also thinks she is just as big as everyone else. She already likes to color and draw. Definitely a girl thing. She is also finally talking. I was getting worried there for a while. Because Olivia could carry on a conversation with me at 15 months. She repeats and tries to say most any word we say to her. She still won't say please but does sign it (by patting her chest). 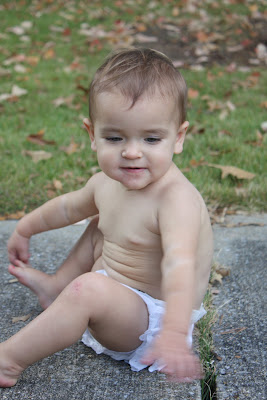 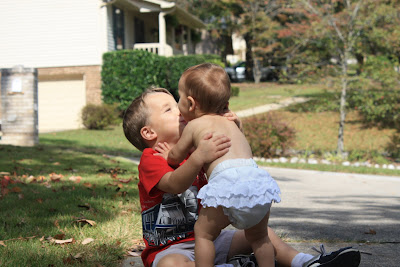 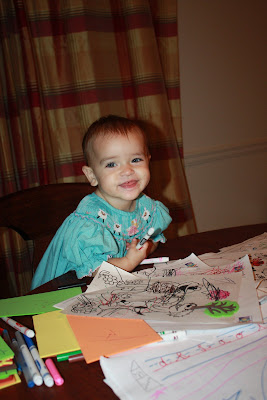 #5 It's Robert vs. The Fall Leaves at our house now. This battle last all..fall..and winter...LONG! BUT, we did find some perfect leave picker uppers! She's holding the bag around the outside of her ankles and scrapping the leaves in while Landon holds the bag. Daddy is a good teacher! 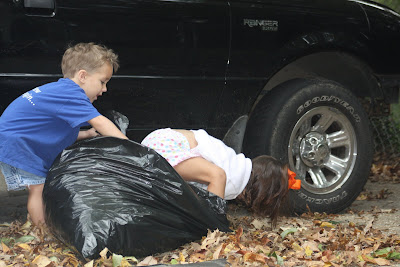 #6 We have been enjoying this WONDERFUL fall weather. I think it's so neat how right before every season starts to roll around your body starts to crave it. We've enjoyed parks and picnics galore! 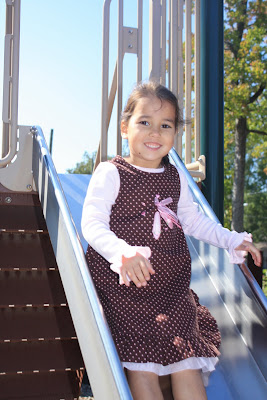 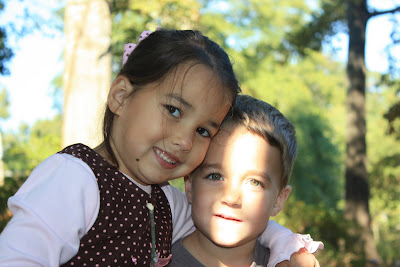 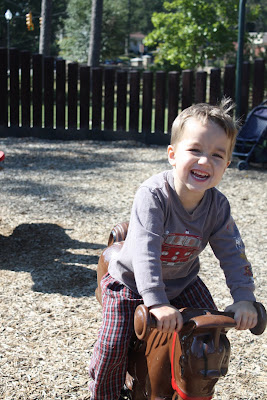 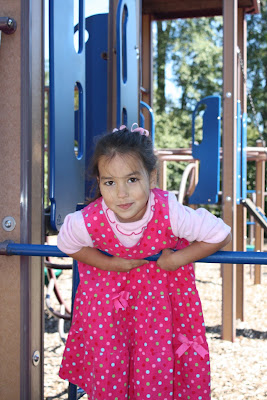 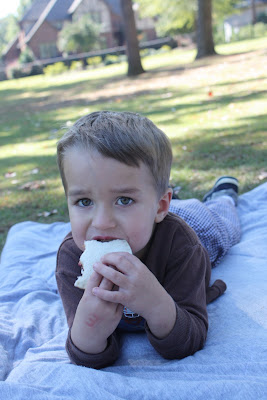 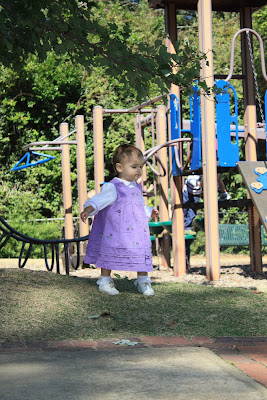 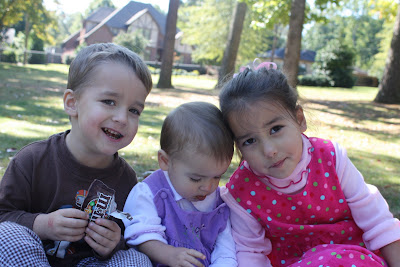 #7 Lillian actually grasps the concept of t-ball. Pretty amazing I think. She is so observant when the others are playing! The other afternoon, she grabbed her bat, set up her ball and went to town knockin' it off all by herself!!! I tried to turn the bat around for her so she could hit with the right end, but she was adamant about hitting with the handle end. 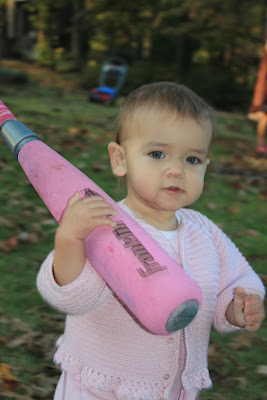 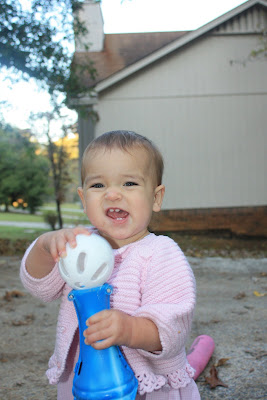 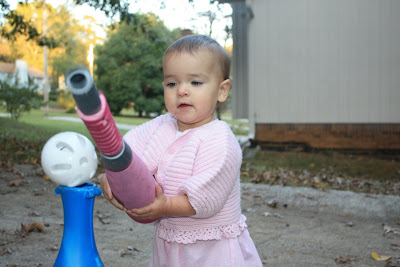 Seriously, no help from me. And she would run and go get her own ball!! :-)

#8 Last but not least, Landon wrecked Robert's truck. Let me preface the rest of the story by saying THIS IS NOT FUNNY...BUT NO ONE WAS SERIOUSLY HURT.

Yep. I guess we didn't learn our lesson from this time or even this time, but our 3 year old little boy (smart one he is) crashed Robert's truck into the tree at the end of our driveway. I was sick and Robert stayed home one day to help out. He had run inside to bring me Lillian and was going to leave with Landon to go and get gas in his truck. When Robert walked in, Landon started honking in the car. I immediately began to say, "Robert, you can't leave him out there alone...one time when I was a little girl, I took a car out of gear and almost crashed it into my parent's brick wall!"

About 10 seconds later, we hear a big crash. I've never seen Robert move so fast. That God that no one was out there and no one got hurt. It scared Landon to death but he was okay.

Anyway, it definitely shook up our day. And now the grill of Robert's truck is all messed up.

Funny a mother's intuition. It's like I knew...and crazy how I said it right before it happened. 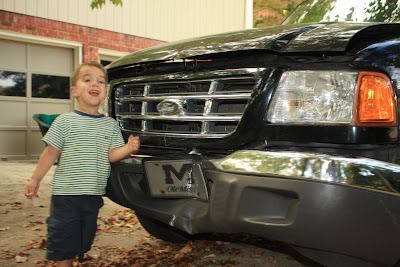 Anyway, that pretty much wraps up the past few weeks for us!!!

Hopefully, there will be more adventures to share in the coming weeks!!!! Maybe I'll actually sneak into a photograph one of these days. I feel like I don't exist...at least in photographic evidence that is.
Published by Ole Miss Mom