I've never done this before but I've seen others do it and thought it was interesting.   I'm calling this the Hidden Baby Diaries.

Fri May 18th: had a positive preg test - complete denial - but thought could be false positive.
Sat May 19th: had a positive DIGITAL test - told my sis.
Sun May 20th: told Robert.  Yes, I waited 2 days.  hehe  It took him about a week to process.  Also, I have NO idea how far along I am.

We proceed to go on like nothing has changed the next week.  I finally make a prenatal appointment.  With a history of blighted ovum (empty uterus w/ pregnancy symptoms) I get in fairly soon and easy.

For 2 weeks I have complete mixed emotions....way up and way down.  I can't talk about it with anyone.  And I can't help but reminisce about my loss before having Rhodes.  I had to have 2 DandC's due to complications and have fear of reliving that pain - emotionally and physically.  I just want to get to June 5th (first appointment), see a heartbeat, and THEN we can proceed from there. (i.e. talk/plan, make it real)  If anyone has experienced a loss, you know the feeling.  And it doesn't matter how many kids you already have.

June 3 starting to have waives of nausea.  Not too bad....think it's in my head.  Also realize it can be a good thing.

June 5 is here - appointment day.  Nerves galore!  I'm taking Rhodes with me and Robert is meeting me up there since I due for ultrasound first.  The minutes crawl by.  Pretty sure the nurses are thrilled to see me again.  ;)  The nurse says my blood pressure is up.  Um, yeah, ya think?  I'm nervous!

Ultrasound goes well!  I'm 6 week 2 days on the dot and the heartbeat is 115 bpm!  Everything looks good!  Due date January 27, 2013.  My doc kinda teases Robert and I.  We all giggle a little bit because Robert had THE appointment scheduled for March and neither of us had a peace about it.  I guess the Lord had other plans.

The next week is not too good.  I feel TERRIBLE!  And have to "hide" it.  I'm exhausted and sleeping 10 hours/night and taking naps almost everyday.  I'm also getting terrible headaches!

Olivia almost catches me in my "operation cover up pregnancy".  She opened my phone and saw a pregnancy app.  Now, to be honest, I've had this app on my phone for a WHILE.  I like to see how far along my friends are sometimes and this app tells me that info.  But she comes in my office and says, "Mom, are you pregnant"  I say, "Why?"  she says, "I opened your phone and saw a pregnancy app"  I said, "You don't have to be pregnant to have a pregnancy app on your phone"  she then says, "Well you lied to me about Rhodes" (remember she had just turned 6 when we told her!)

Other than the occasional sideways glance from me and Robert when anything "baby" comes up, we don't discuss "IT" much.  We know that it will be a shock to many if not all our friends and family.  To be quite honest, I have moments of sheer panic myself as well.  At this point, I do not even own a crib anymore.  And that's just the beginning.

OH, I will find out this time around.  After finding out with Olivia/Landon and NOT finding out with Lillian/Rhodes, I feel that you bond much better with the baby knowing ahead of time.  I found myself in shock the first 2 days after the "surprise babies" and it took me a little longer to mentally wrap my head around the gender.  And I'm calling it now...I think it's a girl! :)  But I've been wrong every time...so who knows!

My sis and I have been brainstorming on how to actually tell the world about this new little one and then HOW to reveal the gender.

Hopefully we can come up with something super fun and unique!! 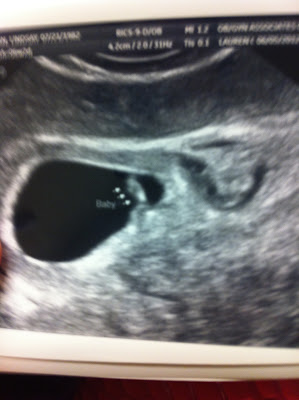