I thought I'd post one of my grocery deals instead of pharmacy trips. So here it goes.

Most of these items were BOGO at Publix this week. I had coupons for everything but the peanut butter...but it was $1.29/jar so it was still a great deal! The brushes were not on my list. But since I left my brush at the lake last weekend, and they were in the clearance bin for $2.39 each, I decided to get them. Robert's been using the dog brush. :-) He cleaned it out though - don't worry! :-) 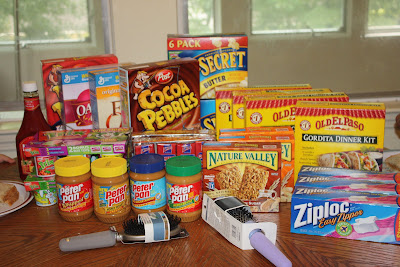 You get the point. If I had more coupons for any of these things, I probably would have bought more!

Now, if I can just find a place to keep all this stuff!
Published by Ole Miss Mom