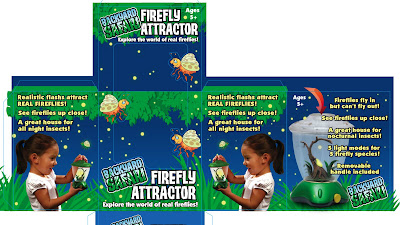 No, your eyes aren't fooling you. That's our "model daughter" on the package design of one of Summit Toy's new products!!!!! So next time your in Walmart, Target, Toys R Us, Walgreens, or many other places, don't be surprised to see her sitting on the shelves!!! (Actually, it'll probably be next year)

This is from one of Summit Toy's lines Backyard Safari. Landon and Olivia have thoroughly enjoyed many toys from this line.

This all started when the graphic designers asked Robert if his kids could come in and be photographed for some possible toys. We came in the next day and I had no idea how they would do. It definitely took a little warming up in front of the big lights. Landon wouldn't even go in front of the camera at first. We had to use a little bit of reverse psychology on him.

But they snapped of some pics and the kids walked out with some fun toys - you know..from the bribe. hehehe Too bad Lillian is too young...it could have been a family affair! There may be one toy that Landon made it on. Only time will tell. And Olivia might be on a couple more. We'll see!

Oh, and it's killing me that she doesn't have a bow in her hair. But they vetoed that. I guess the majority of parents don't send their kids outside to play with a bow in their hair. ::gasp::
Published by Ole Miss Mom